Located North-West of the Altis International Airport, the city of Athira is one of the Altis' largest settlements. It is situated not too far from The Poseidon Cartels Border making it a bustling town full of shops and activity.

A fuel station and respray shop are situated on the main connecting road, while a church is constructed in the city center.

Athira is home to the Diamond Factory that is built on the city's limits to its east. Its also Home to the islands second largest Hospital Complex operated by the National Health Service.

Being the bustling town it is, Athira is very much a clone town and contains the following shops:

A Bank as well as a Post Office are both situated within Athira, The Post Office being located near the Vehicle Garage.

The Altis Police Service has also based themselves within Athira with a Police Station being the home to the East Altis Police Constables. 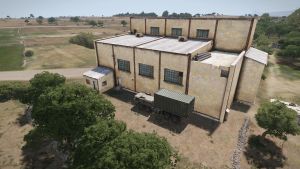