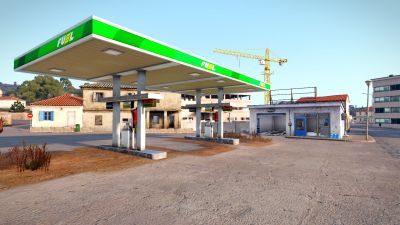 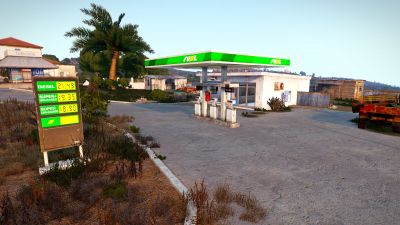 I like driving in my car, its not quite a Jaguar. Fuel Stations, fuelling Altis's most common form of transport. On Altis you're never far from a Fuel Station (unless your up in the north-western mountains that is) each of which is fully equipped with all your immediate roadside needs such as nibbles and toolkits. They also meet Rebel needs, the need to rob. Fuel Stations can too be robbed of some quite large sums, that is if the Police don't show up. They also sell Lottery Tickets for £25,000 (Prizes can be claimed from a Post Office).

To fuel your vehicle, park it near the pumps, walk over to the pump and select fuel vehicle on the scroll wheel menu, this will produce a progress bar, once full you'll be charged from you bank and you may be on your merry way.

There are 13 named Fuel Stations on Altis: