The Los Santos Police Service (LSPS) is the territorial police force responsible for law enforcement across San Andreas, covering an area of 127 km2.

See below for information on applying to Join the LS Police Service.

The Los Santos Police Service is organised into the following directorates:

Each directorate is made up of 25 officers, with the exception of Specialist Operations which has 15. Each directorate has 4 operational teams consisting of Sergreants and Police Constables. 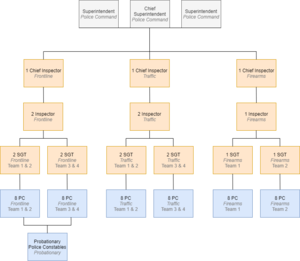 The Silver Command is made up of 3 officers. 1 Chief Superintendent (C/Supt) and 2 Superintendents (Supt). The Bronze Command is made up of 1 Chief Inspector (C/Insp) and 2 Inspectors (Insp) for each directorate with the exception of Specialist Operations which only has 1 Inspector. Within Frontline and Traffic there are 4 teams each led by a Sergeant each with 8 Constables. In Specialist Operations there are only 2 teams.

Traffic Policing officers are specially trained in enforcing road traffic laws and high speed pursuits. They are also trained in tactical pursuit tactics such as TPACs and Hard Stops in order to prevent offenders who attempt to escape via the roads. They utilise Traffic Pursuit Vehicles. Each vehilce performing traffic policing duties is assigned the Romeo-Papa callsign.

Specialist operations is a cluster of multiple units. Starting with the firearms unit: Officers in this directorate consist of Authorised Firearms Officers (AFO) and Specialist Firearms Officers (SFO). They utilise Armed Response Vehicles (ARV) in Tactical Support Teams (TST) to respond to firearms and violent crime incidents, as well as working as trojan proactive units as visible armed response vehicle patrols in areas of high crime to deter those who pose a threat. Each vehilce performing specialist operations duties is assigned the Trojan callsign.

Besides that is the National Police Air service, officers in this directorate consists of pilots who pass flight training and tests. They specialise in air surveilance, persuits and searching suspects. The members in specialist operations are the inspector and sergeant of NPAS, who is leading the unit, everyone who is part of the unit as a pilot, are regular officers in frontline, traffic or firearms.

The Dog Support unit has a same structure as NPAS and MPO, where 1 inspector and 1 sergeant is leading within specialist operations, and the members are part of frontline, traffic or firearms. Dog handlers are highly trained to use dogs for searching, defending themselves and normal patrol duties. They utilise the Mercedis Benz vito and Skoda Suburb.

The Marine Policing Operations is specialised in water operations, and lead by 1 inspector and 1 sergeant. They are trained in diving, and driving boats in persuits. They only have 1 boat in their arsenal for now, and the department is still under construction.

Police officers are paid according to a uniform pay scale, which increases with each promotion, starting at £140 for PPCs up to £TBD for C/Supts.

In order to join, aspiring recruits have to fill out the official Police Application Form on the government website and, once received, applications will be reviewed by the Police Command.

The Los Santos Police Service operates and maintains a fleet of various types of vehicles which are used for a range of duties, these include:

The Los Santos Police Service was formed on the 22nd February 2020, as a method of Policing Los Santos.