Kseniya and her MH-9 at Spec Ops HQ 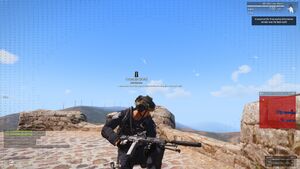 Kseniya on an AR patrol as guest

Joined the Marine Policing Unit in August 2019 when it was under command of Sonder. By the end of the month I was a trainer and helped Bone Topic with reworking the marine training. In November I got promoted to DMPU which I stayed until end December where I was put back to boat trained under gold command decision.

I became an AFO back in March 2020 by the Armed Response trainer Brandon Pigeon. This basically means that I am allowed a DMS, 6.5 supressor and bipod on normal patrols (in my pockets), and with AR permission, an MX SW. Most SW deployments happen for operations or when an RBA/AR weapon cache is attacked by rebels.

Joining the NHS as my first whitelisted faction, it might be a good thing to know that my medic character and my police character is different. They're sisters, but else they don't share the same memories. She left the NHS on the 30th of September 2020

Joining Air Rescue somewhere in November 2018, I slowly progressed towards a tier 3 member with taru training. In March 2020 I was contacted that my application of AVM was accepted.

Joining RIR in December because Pavlic wanted to do my test, I have done some RIR patrols but I keep focussing on Air Rescue

Joining the application team whilst Mike was leading it, I slowly progressed to Senior. 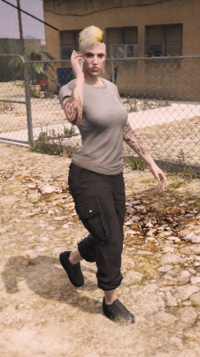 Kseniya on the phone in Sandy Shores

Kseniya was born in 1999 in West Flanders, but moved to Leeds at an early age. She grew up with only her father and later a step mother. She did have a sister but she never really interacted with her. At the age of 12 she stopped going to school due to financial problems and started making firearms instead. At the age of 16, due to a false call, the firearms unit of the West Yorkshire police shot her father, causing her to flee the country alone and start living on the streets of Los Santos. At the age of 20, she made her own gang called The Legion, and started with drug runs. By this time she got diagnosed by Dissociative Personality Disorder. She soon moved to the village of Sandy Shores where she helped another OCG with crime. She soon became pregnant and moved to Vinewood due to the police raids on Sandy Shores which became way too frequent. Upon moving to Vinewood, her crime rate went lower, but didn't stop. Due to the tasing and the intentional ramming of police, she created a grudge on certain police officers. By this time she moved houses again in an undisclosed location.

Alesia was born in 1996, and had a normal childhood, however she always had something for medicine. She was born in a rich family with her family being bank owners. At the age of 18 she started studying in order to become a medic, 6 years later she applied for the NHS and passed the interview. She was able to drive at age 16, and able to fly at age 18. However, she does not know how to swim. At this moment, she lives in Vinewood having a high end life, but stays working as a nurse in the hospital in order to make the city a better place. She joined the Hazardous Area Response Team and got helimed trained at the rank of paramedic, and passed her trial 3 weeks after. In april 2021 she was given the chance to proof as a doctor, which she accepted, only making the title head sister instead of doctor as she wished to stay a nurse.

Emily was born in in 1996, and grew up with her sister Kseniya before she moved out at the age of 18. She joined the RAF in order to learn more about mechanics and flying, but she soon got bored of this. In August she joined the Los Santos Police Service with the aim to join NPAS and traffic. In September 2020 she joined traffic as a trainer and helped the branch of traffic with training the members. In February 2021 she decided to move on to a different country for a bit and resigned from the police.

Samantha 'Stephanie' Diaz was born in 1993 in a small coastal city of Havana. She soon moved to the UK where she studied chemistry, she never really did much with this until in 2020 she got a job offer within the Los Santos NCA. She soon joined this and specialised in narcotics, and proved her worth soon after. She will not disclose much about her past as deep undercover, but she is sad that the NCA merged with the LSPS, where she now became a Detective Constable specialised in narcotics & gang crime.

Katya, the niece of Nikolai Belski, came from Russia to Los Santos to start a new life with more oppertunity. She got offered a job in Gruppe 6 which she mainly accepted for the free food it offered as she didn't got paid a lot before. Since she was young she was a hunter, using some kind of bold-action rifle to hunt down animals that are a good meal to eat. Since her arrival in Los Santos she couldn't read or write English, which often leads to funny moments in the paperwork in prison.