The Road Traffic Unit is comitted to reducing the number of traffic related deaths, injuries and crimes on Altis roads. They work around the clock to keep you and your loved ones safe when travelling by road vehicles on Altis. Officers of this unit will mostly be found patrolling the highway between Kavala and Athira, but can also be found patrolling the backroads. They do not have any specific base station, but operates from all police stations.

As officers of the Road Traffic Unit spends most of their patrols on the roads they often deal with abandoned vehicles, calling ARAC to tow the vehicle. They will also often help out stranded civilians, whether their vehicle is broken down, out of fuel or any other issues. 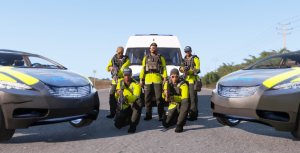 Proud RTU officers showing of their uniform and vehicles

Due to the nature of this unit, any officers employed by the Road Traffic Unit recieves access to the Hatchback Sport, which other officers will recieve at the rank of Sergeant. The Hatchback Sport is a crucial asset in the fight against road-related crimes. Officers within the RTU does also gain access to the rank-accessible vehicles when they achieve that specific rank.

The Road Traffic Unit also has gets access to unmarked SUV's and Hatchback Sports.

The Road Traffic Unit has their own uniform. When doing work on or around the highway, visibility is key, therefore they recieve their special high-vis coat. For extra safety they also get special access to the Carrier Lite vest. This uniform is always to be worn when on a Road Traffic Unit patrol, and is also issued to non-RTU guests.

To join the Road Traffic Unit, you will have to complete an entry test, conducted by the RTU Training Team. The training team consists of officers who have dedicated their time to train and guide officers within the Altis Police Service. The team has a chief that oversees the efficiency and guides the trainers, alongside RTU Command. Should you have applied to join this unit and your application was accepted, it is these officers that will test your driving, policing and professionalism to see whether or you are fit to be a traffic officer.

The training team is also responsible for monitoring the driving of other officers throughout the island to ensure that their driving is safe and providing corrective measures in the form of an Road Traffic Safety Course, also known as RTSC, where appropriate. Depending on the circumstances, the training team may either issue a RTSC or a warning point. If you recieve multiple warning points a RTSC will automatically be issued. There is two types of RTSC's that may be issued:

Unmarked vehicles is an essential tool in the fight against violators of the Road Traffic Act of 1988. They will often lie hidden where they are least expected and wait for violators or any wanted vehicles pass by. Using the ANPR the officers will check the speed and whether the vehicle is wanted or not. Should the passing vehicle be speeding or is wanted the officers will give pursuit. Access to the unmarked vehicles is limited, only Inspectors and above and members of the training team is authorised usage of unmarked vehicles. Further details on use and tactics will not be disclosed.

This constabulary has had a bit of a rough history. It was disbanded in the start of 2036, but was reformed one year later at the start of 2037. It is now going strong with a bunch of dedicated officers.

However, due to lack of numbers RTU was again at the end of 2040 disbanded and instead turned into a Unit.

The Road Traffic Unit may regularly hold checkpoints on the roads. This could be for various reasons, typically vehicle checks, speed traps or breathalyzer tests. These checkpoints may be held anywhere on the roads and is not limited to the highway.

Should the RTU hold a checkpoint they will likely be in full force, often accompanied by other specialised units. Trying to evade a checkpoint by driving offroad or turning around will not help your case, and you can expect to be pursuited.