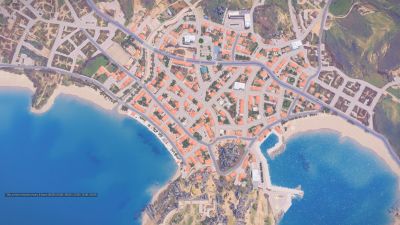 The capital city of the country, Kavala is one the biggest and most heavily-populated (if not the largest) city on the Altian mainland. It serves as the regional capital of the Western, Queensland and the official home of the Altis Mayor.

Two fuel stations are built in the city; one along a road that breaks off the main western highway in the south, and another in the northern district of the city. Four churches are also nearby and are scattered throughout all sides of the city. The country's largest civilian hospital is also built in Kavala, which is operated and Head Quarters to the National Health Service. Kavala is the main working area of the City of Kavala Police and also home to the Altis Police Service's Head Quarters which also provide a Coastguard and Marine Policing Unit dispatch location.

The main western road loops around and runs directly through Kavala, with many more arterial roads linking the villages of Aggelochori and Panochori to the north and south-east. These direct links make Kavala a busy city bustling with people and traffic.

Kavala was founded by Venetian merchants on the ruins of an ancient Phoenician city, and served the Republic's capital for several centuries before its status was revoked. Since then, it has remained as one of the most densely populated settlements on the island.

Because of its rich cultural history and unique surroundings, there are quite a few points of interest. These includes: