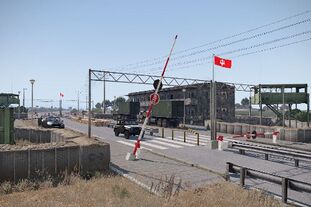 You must at all times be carrying a Border Pass whilst operating within their territory, or you may face severe consequences, depending on which member of the Cartel is managing you at that time. You can purchase said Border Pass from both Borders, alongside of the Poseidon Offices.

The Cartel's lands offers you access to a variety of different opportunities - but it all starts at the border. The Poseidon Cartel often mans the border, stopping all members of the public and ensuring you have the adequate pass and that they are carrying no items with malicious intent. Once all is clear, they are able to proceed to continue their business.

Every Friday at 8PM, an automated event begins. This event is known as Border Wars - a Redzone appears near the current border. The outcome lasts until the next week, where a new outcome is determined.