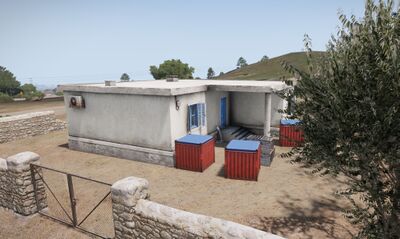 Picture of the Platinum Buyer. The buyer is located outside Pyrgos by the Triton Compound.

The Platinum Buyer is where you sell the platinum, which you've stolen from The Continental.

Keep in mind, if selling is successful, Poseidon are still allowed to shoot you until they loose sight of you.

The most significant rule(s) for this part is:

Combat logging at any point during RP is exploiting. Some examples of this include: logging out during a firefight, being chased by the police, arrested by the police, while dead awaiting a medic, logging out in order to save gear, rage-quitting, logging out whilst restrained/detained. Punishment is a permanent ban. Staff can make an informed decision depending on if you’ve made an attempt to resolve the issue. We do suggest you attempt to rejoin the server and continue the roleplay (try messaging them with the mobile system first).

Combat storing, such as storing a vehicle whilst you are being chased, impounding/scrapping your vehicle to gain an advantage or to otherwise prevent roleplay.

Each bar has a price of £200,000, therefore Poseidon will try and do anything they can to stop you. When selling, keep in mind they are still allowed to shoot at you.