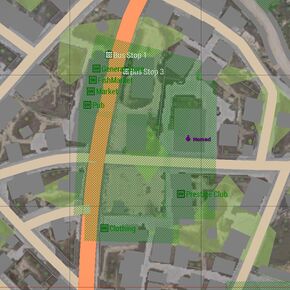 During this term, the player who holds the position of Mayor will have a special title under their name tag, appearing as "Altis Mayor" in purple. This name tag shows up for the player at all times, both when they are in a civillian slot, and a faction slot.

The Mayor also gets access to 10 Kavala Street during his term. Meaning he has access to open the gates, normally locked to people in a civillian slot. The Mayor can also choose to spawn at 10 kavala Street.

The Mayor has access to his own personal compund, situated in Kavala. 10 Kavala Street is named after 10 Downing Street, the residence of the UK's First Lord of the Treasury (normally the Prime Minister).