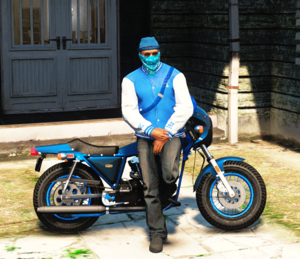 My name is Johnathon Reeds. I originally joined the community back in early 2017 where I spent my time picking apples and making cider on Altis. I became a young recruit in police before moving up to PCSO, and I became a Surgeon in the Altis NHS before taking a very long leave from the server. I joined back in early 2020 where I worked my way through the ranks of Police and Poseidon before largely moving over to the FiveM server. I'm currently a Halcone in Poseidon, and a member of the Marabunta Grande turf gang on FiveM.

I've played the FiveM server on and off since around April, through this time I've made many characters, and worked my way through the ranks of a couple different groups, here are the ones I have so far:

Johnathon was my original character on FiveM. In his early days, he would roam around largely by himself, smuggling cocaine and doing mechanic jobs to get by. Nowadays, Johnathon has gained his solicitor license and works to the best of his ability to help those facing prison sentences and large fines.

Adam was a character I spent a good amount of time on within the FiveM server. Adam worked as the legal representative and chief of public relations in The Downtown Cab Co. lead by Joshua Nicholls until the company was forced to file for bankruptcy on January 12th 2021.

James was the character that made me the most interested in moving properly over to FiveM. James Smith was a member of the National Crime Agency, leading a small group of people in charge of the operational side of the group. James was around for the majority of the NCA's lifespan before the merge with the LSPS to form the Criminal Investigations Department on February 16th 2021.

Carlós is the main character that you will find me playing on nowadays. Carlós is an El Salvadorian male, and also a member of the Marabunta Grande turf gang within the server. You will often find him roaming around the city on his motorcycle with an extremely bad Mexican accent to go along with it.

I spent a lot of time on the Altis Life server, and still hop on to go on Poseidon patrols where I can, here are some of the things I've done:

I've been in the Altis Police Service twice now throughout my time in the community. Once as a young recruit while the rank still existed, and later rejoining and going on to become an Inspector within Police Academy helping out to train the new PCSOs of the APS.

I've been in and out of the NHS since I joined the community. I have now worked my way up to the rank of Surgeon twice in various departments, and attained the rank of Tier 2 in Air Rescue.

All my homies hate Nikolai