Difference between revisions of "Agios Police"

The Agios Police HQ was initially located in Sofia and was later on moved to Pyrgos. After a few years, the constabulary was relocated to Agios Dionysios and renamed “West Altis”, due to its new position, overviewing the West side of the island. However, as off January 2020 it was again renamed to "Agios". Being one of the biggest drug areas on Altis, officers in this district often deals daily with both the ‘worst criminals’ and the ‘most random cases of death’.

The goal of the constabulary is to provide our officers with the necessary training and knowledge. This will allow them to become the best possible officer that they can. The main Police Station is located in the town of Agios, meaning that the area that we mainly focus on, goes from Lakka to Kavala. These areas are notorious for drugs and rebel activity meaning there's always plenty to do. 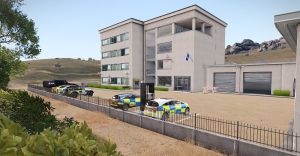 So you’ve just passed your Final Assessment and you’ve been assigned to our constab, but what does that mean? It means that you’re almost a fully fledged Police Constable and as such you get a new badge number as well as some responsibilities.

As a PPC you’ll be able to perform almost all duties of a Police officer including but not limited to performing arrests, enforcing and upholding the Law as well as all the other normal tasks.

At this point you also get access to a larger amount of gear, although some of it may be still threat level dependant.

From now on, you won’t have to undergo any more tests! So you may wonder, how do I get promoted then? Usually, every Prob. PC has to wait 30 days in order to reach the eligibility for the rank of PC and after that time period, it’s up to the constabulary command to decide whether you deserve a promotion or not. In order to make that decision, our command will gather opinions and feedback from our senior members (SGT+). So, if you’re planning on getting through this stage, it’s highly recommended that you patrol with our SGT+ and ask them to write you some feedback!

As mentioned before, our members use an evaluation tool in order to determine whether an officer is performing well or not. Some of your attributes will be assessed: attitude, maturity and leadership.

These are some of the questions that we keep in mind while evaluating an officer:

Everyone will have subjective opinions and expectations so feel free to ask the officer you’re on patrol with for any advice, suggestions or clarifications at the beginning of the patrol.

Below you will find a list of our current Command members. These are the people who run the Constabulary. Everyone here is extremely friendly and approachable and they will be happy to answer any questions that you may have.

The Agios Representative is here to help make the people in the constabulary heard. Their job is to take suggestions, questions and complaints to the appropriate authorities so that any query is dealt with in the best possible manner. All queries can be either submitted through a form or communicated directly via private message and/or a meeting with the REP. All conversations will be kept confidential unless otherwise specified.